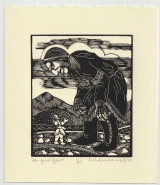 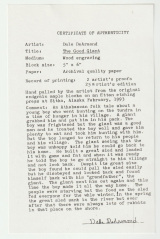 Hand pulled by the artist from the original end-grain maple blocks on an Ettan etching press at Sitka, Alaska February, 1993

Comment: An Athabascan folk tale about a young boy who went hunting on the tundra in a time of hunger in his village. A giant grabbed him and put him in his pack. The boy was frightened but the giant was a good man and he treated the boy well and gave him plenty to eat and took him hunting with him. But the boy longed to return to his people and his village. The giant seeing that the boy was unhappy told him he could go back to his home. He built a great sled and loaded it with game and fat and when it was ready he told the boy to go straight to his village and not look back. Despite its great size the boy found he could pull the sled easily but he disobeyed and looked back and found himself back with his "grandfather", the giant. The giant sent him out again and this time the boy made it all the way home. The people were starving but the food on the sled fed everyone for the whole winter. In the spring the great sled sank in the river but ever after that there were always lots of rabbits in that place on the shore.